Scale and gauge are two words that are often confused and used interchangeably when in fact they refer to two different things.

If you spend any time in a model train store you'll quickly discover that model trains come in a variety of sizes. This is a good thing as each different size has its own advantages and disadvantages.

A model is a miniature version of some item, usually one that exists in the real world (there are some fantasy models based on the creations of someone's imagination and do not exist but let's ignore those for the sake of argument). The real world item that the model is based on is referred to as the prototype. If a model's dimensions are all accurate and within proportion it is called a scale model. 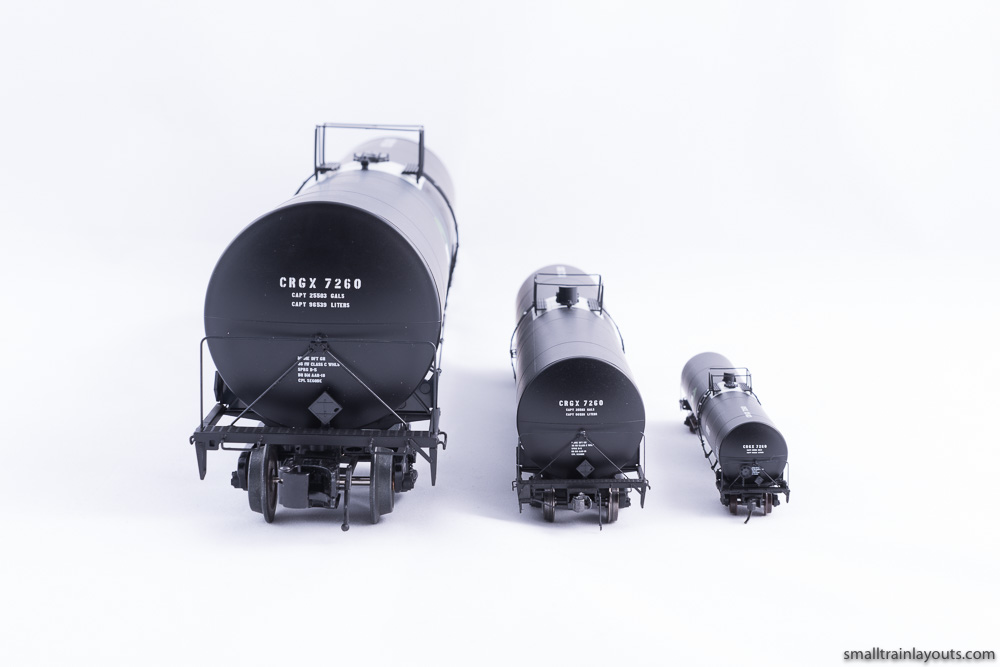 G G scale originated in Germany by Lehmann Grosse Bahn in the 1960's, Grosse in this instance meaning big size which is where the scale got its name from. These days the G also refers to Garden as most G scale railroads are built outdoors although it is quite possible to build and indoor G layout. G scale has a few different scale ratios: 1:32, 1:29, 1:24, 1:22.5 and 1:20.3.

O O (oh) scale was originally called 0 (zero), and is largely considered a toy train scale. Over the last few decades scale modelers have started using O scale and this has resulted in a split between "high-railers" who run toy trains on oversize track and scale modelers. Lionel was the first manufacturer to offer electric toy trains in America in O scale.

S The rise in popularity of smaller model trains after the first World War saw the introduction of S scale so named for "Sixy-four" as it uses a ratio of 1:64 and was popularised by American Flyer trains. S scale trains became very popular because they run on 2 rail track which has a more realistic appearance over O scale 3 rail track.

HO Probably the most popular scale in the world, HO gets its name from "Half O" as models are roughly half the size of their O scale counterparts. In Europe, HO uses a ratio of 1:87 although in USA the scale uses 3.5mm to the foot which equates to a ratio of 1:87.1.

N The second most popular scale after HO, N scale gets its name from "Nine", referring to the 9mm gauge between the rails of N scale track. N scale was developed in Germany in the early 1960's and appeared in the US in the late 1960's. With a ratio of 1:160, the benefit of N scale is that it allows longer trains and sweeping scenery.

Z For a while Z scale was the smallest commercially available trains and thus the scale was given the last letter of the alphabet as it was presumed that no smaller trains could be made. Marklin introduced Z scale in the early 1970's, although selection is limited there are a number of manufacturers producing excellent models, one example is Rokuhan from Japan that produces Z scale track that is widely considered to be the best.

The table below lists the popular scales and their scale ratios.

Narrow gauge offers the ability to traverse difficult terrain such as mountainous areas. As such, it can handle steeper grades and tighter curve radii but at the cost of slower speed and less capacity. Narrow gauge rolling stock tends to be a lot smaller than standard gauge counterparts, typical car length on Colorado 3 foot gauge is 30 foot (9.15 metres). On the other hand, broad gauge offers larger capacity, more stability and higher speed but requires much more demanding right of way.

In some geographic regions, the term medium gauge is used. In Australia, 3'6" (107mm) and 3' (915mm) gauge is called medium gauge to distinguish from the 2' (610mm) narrow gauge sugar cane railways.

modelers often choose narrow gauge for other reasons, scenery and scenic potential being the foremost and who can blame them? The Colorado narrow gauge lines traversed some of the most beautiful scenery anywhere. Of course, for those with limited space, narrow gauge does offer some other benefits in terms of smaller rolling stock and sharper curve radii (although not always the case). Given the shorter length of rolling stock, a given length of tangent track will hold more narrow gauge cars than standard gauge cars - beneficial for the designer of a small train layout. 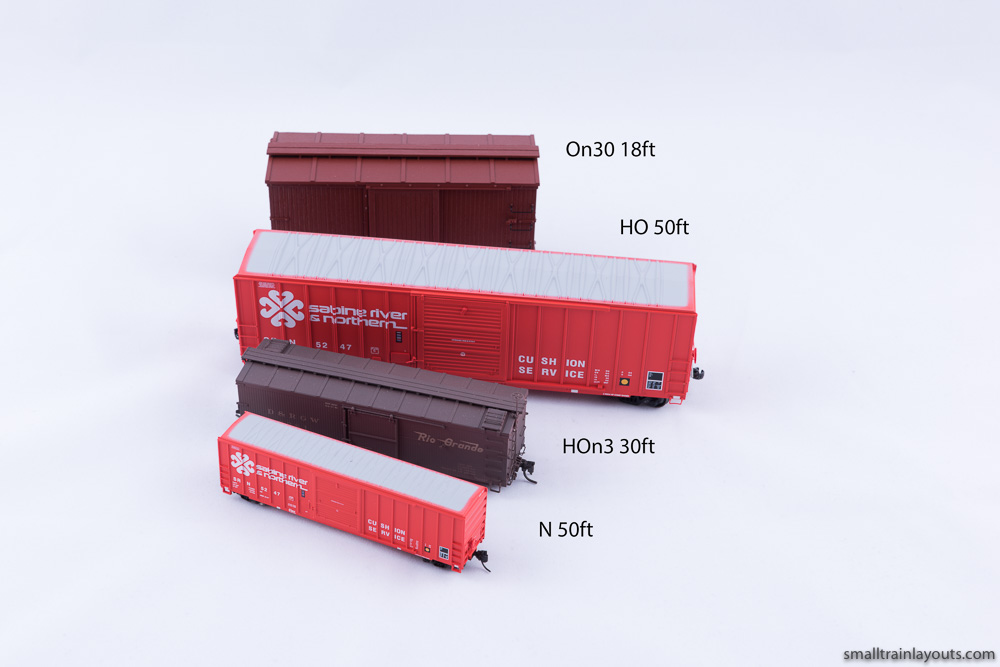 We have already seen that scales are often named using a capitalized alpha character such as N or O and in the case of HO, two letters. In cases of non standard gauge, the gauge is often appended to the scale name. Usually a lower case n to indicate narrow gauge followed by a number to indicate the gauge modeled, for example: On3 would mean O scale (1:48) 3 foot narrow gauge. The numeric value can refer to foot or inches, so for instance On30 means O scale narrow gauge modeling 30 inch gauge. If no gauge is stipulated in the scale name then by implication it refers to standard gauge. 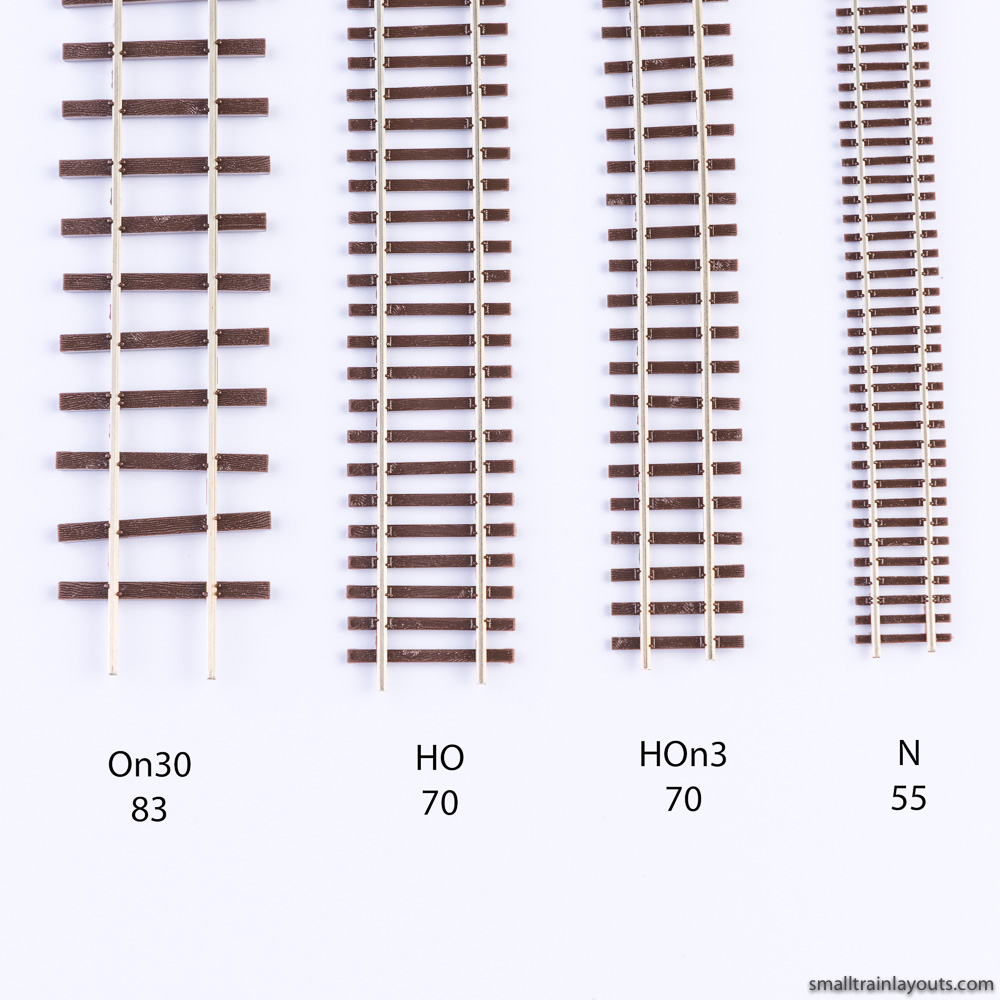 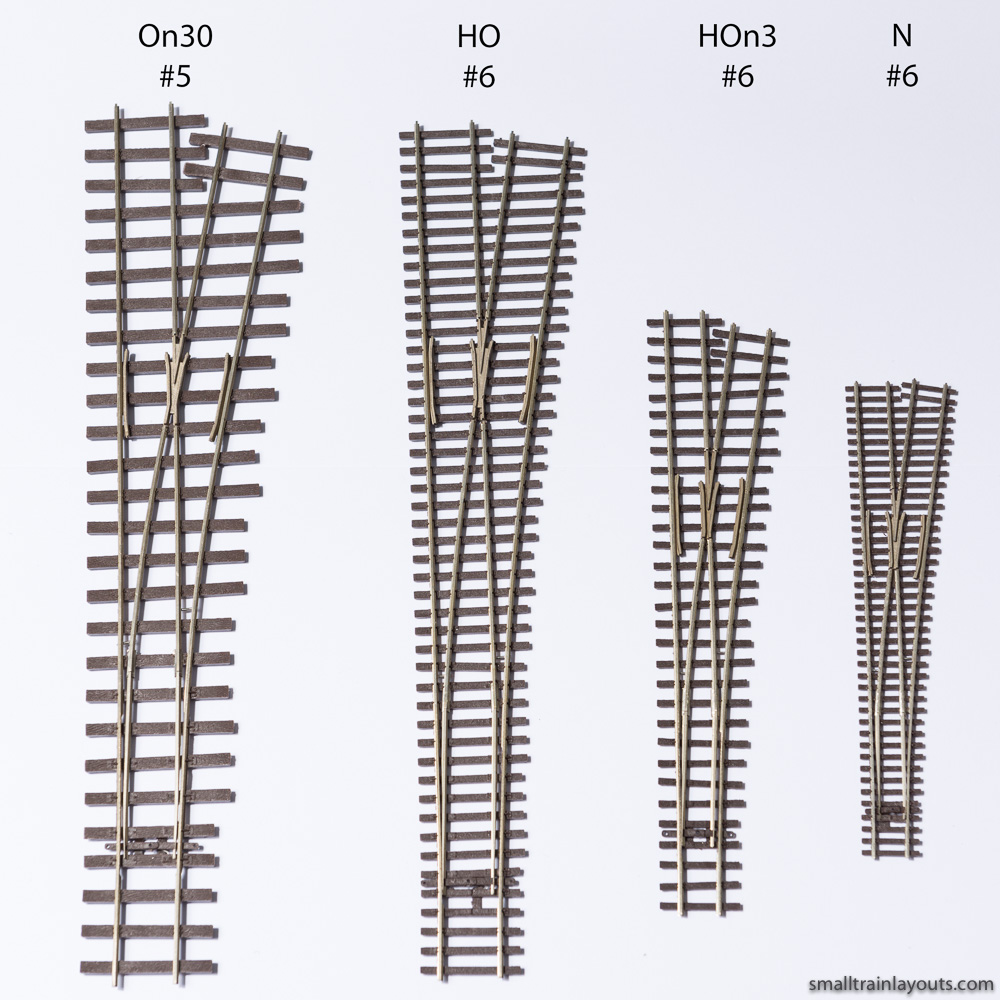 The photo above demonstrates that On30 and HO share the same gauge but HO ties and tie spacing are not appropriate for On30. Note that HOn3 and N scale do not share the same gauge, despite appearing so. Track is Micro Engineering and rail code is 83,70 and 55 as indicated.

Below is a list of some common model railroad scale and gauge combinations.

There are a number of common misconceptions around scale and gauge. Many mistakenly believe that On3 trains run on HO gauge track or that HOn3 trains run on N gauge track. This is not true, however On30 trains do in fact use the same gauge track as HO scale. Of course using HO track for On30 is possible but the tie size and spacing is incorrect as pictured in the photos above.