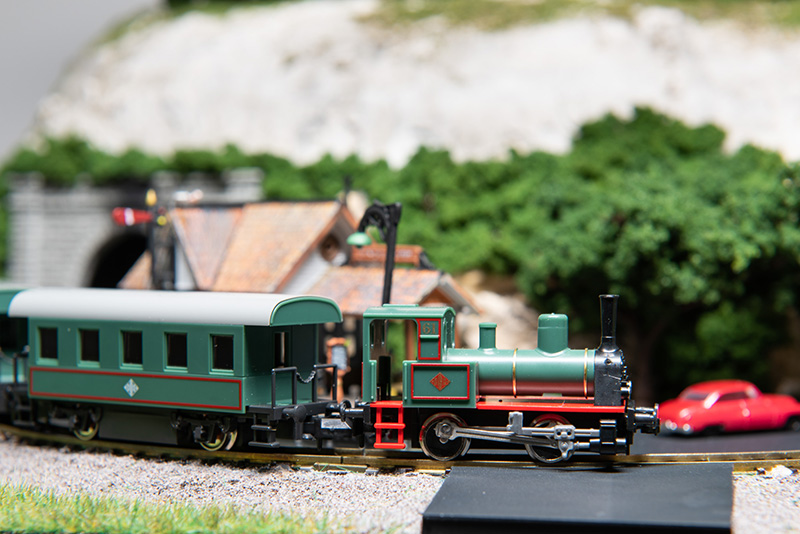 A continuous run layout in one square foot?

After the success of my one square foot switching layout (Nano Industrial), I wondered if it was possible to also build a continuous run layout in one square foot.

After doing some research I discovered that Kato produces 4 5/8" radius curves in its line of Unitrack. I wondered what trains were designed to run on such sharp radius curves, surely Kato would produce the trains to go with such track?

As it turns out Kato produces trams to run on such sharp curves. However, they also produce a line of train sets called the Pocket Line which uses the same chasis as the Kato trams. I managed to pick up a train set at my local hobby dealer and was delighted to find out it runs on the 4 5/8" radius curves.

The design of the layout is straightforward, a 12" (305mm) square base with a circle of 4 5/8" (117mm) radius Kato track. A tunnel helps to hide the loop of track and a small station completes the scene.

The layout at a glance

Construction of such a small layout is rather easy and went very rapidly.

Given that the layout was designed to sit on top of a table or book case, it has no legs. This made construction of the base very straighforward. I used some 2" (50mm) thick insulation foam board for the base and carved out the tunnel using a sharp craft knife. Finally I painted the sides and underside flat black.

The track is Kato Unitrack 4 5/8" (117mm) [20-176] radius curves. A single set of Kato feeder rail joiners [24-818] is sufficient to power the whole layout and connects directly to the Kato controller. I drilled a small hole through the base to run the feeder wires through.

I chose not to paint the rail on this layout and ballasted it using Arizona Rock and Mineral N scale Northern Pacific ballast which I feel is a close match for the molded plastic ballast on the Kato Unitrack.

For such a tiny layout I wanted a really small quaint little station and Woodland Scenics' The Depot [BR4942] is perfect for this little layout. It is a pre-build structure with a lot of nice details and interior lighting.

The scenery on the layout has a bit of a European flavour largely due to the tunnel portals which are from Peco. I used some Sculptamould and some acrylic washes to create the hill.

Static grass was applied using the Woodland Scenics Static King to the front areas of the layout. I used a combination of light and medium green in 2mm and 4mm lengths. A few strands of straw coloured 7mm lengths were added, this really adds an extra dimension to making the grass look real.

This layout really offers some great detailing opportunities. The station parking lot is a great place to add some vehicles - these are a set of sedan and pick up truck by Busch.

Figures are a great way to bring a layout to life and all the figures on the layout are by Woodland Scenics. The station is a great place to add some travellers and passengers waiting to catch a train. An Engineer was added to the locomotive. Finally the ridge on the top of the hill is a neat spot for some campers.

For this layout I only have the one Kato Pocket Line passenger train set which is based on a Japanese prototype. The train set is rather clever in that the tiny steam locomotive is not powered, the motor is actually in the first passenger car which essentially pushes the locomotive along while pulling the second passenger car. Despite the tiny size of the train it still boasts a decent amount of detail which shows up in close up photos.

Theres not much to say about operation on a layout such as this as the train simply runs around the loop of track chasing its tail. It is relaxing to sit back and enjoy the train running through some beautiful scenery, disappearing into the tunnel and reappearing at the other end.

Despite this layouts tiny little size it was a load of fun to build and its great to sit back, relax and watch the train run around chasing its tail.